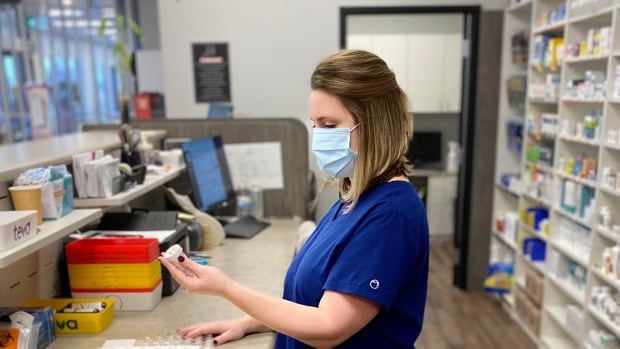 A company that administers drug benefits for some seven million Canadians says it is seeing a dramatic increase in insurance claims for antidepressants such as Prozac, Celexa, Paxil and Zoloft.

According to Express Scripts Canada, claims for selective serotonin reuptake inhibitors, or SSRIs, rose 17% last year from 2019, and peaked at 20% around Thanksgiving.

The company says the increase is largely due to new patients and says the trend is expected to continue as the COVID-19 pandemic persists.

“It’s going to be a very, very difficult time over the next few months,” said Dr. Dorian Lo, physician and president of Express Scripts Canada, the nation’s largest private claims administrator. “It is clear that people are suffering.”

Lo said he expects SSRI applications in 2021 to exceed pre-pandemic levels by up to 25%.

Drugs ‘can absolutely save lives’

The growing number of prescriptions is putting additional pressure on mental health services supporting first-time patients going through what could be the darkest time of their lives, advocates say.

“To put it bluntly, people’s lives are at stake. Too often it results in suicide or attempted suicide,” said pharmacist Jen Baker, owner of Pharmasave Loyalist Pharmacy in Amherstview, Ont.

We need systems in place to support people who are hurting.– Jen Baker, Ontario Pharmacists Association

Baker, who also chairs the board of the Ontario Pharmacists Association, said SSRIs can bring people back from the brink. “Especially when the symptoms become unbearable… medication in this case for mental health can absolutely save lives.”

But she cautioned that appropriate mental health supports also need to be in place, especially for patients who are prescribed these drugs for the first time.

“We need systems in place to support people who are hurting,” Baker said.

Dr. Alykhan Abdulla, chair of the family and general medicine section of the Ontario Medical Association, said doctors are seeing more patients seeking help to cope with symptoms of depression than ever before.

Not everyone ends up on SSRIs, he said, but the lack of support for those being prescribed antidepressants for the first time can affect their long-term recovery.

Abdulla said most patients will begin to recover within six to eight months of starting a new prescription, but without additional therapeutic support, what could have been an isolated episode could become a chronic mental illness.

Abdulla said few doctors also provide therapy and their patients can wait years to see a psychiatrist. Despite new provincial investments, publicly funded options are particularly limited. Not all employers cover private therapy, and some of the patients who need it most don’t have private insurance, he said.

“The people who need mental health therapy the most are the ones who have the hardest time getting the help they need,” Abdulla said. “It is unfair.”

He said the spike in claims for SSRIs only tells part of the story: Doctors also prescribed more sleeping pills and anti-anxiety medications, and treated more patients for other physical symptoms of stress.

“We really see a lot of people being challenged for all sorts of reasons, so I would approximate the number to maybe 40% needing medication during this time of this pandemic,” Abdulla said.

She had had COVID-19. She didn’t think she could get it back again.